Colours commingle in the galactic Sikkim; virtuousness is present in its peace and tolerance; young and energetic people make it alive; holy rituals and rites, religious festivals and ceremonies, gaudy dance and dresses sublimate heaven for explorers. The settled mighty Himalayas and their eclectic peaks, including Mt. Kanchenjunga, can’t be mapped or explored by a single force, making Sikkim even more obscured and inviting.

Ever since ‘The Kingdom of Sikkim’ merged with the Union of India in 1975, it has surprised humanity despite being the second smallest and least populous state in India. Influenced by various cultures, the state has inherited many languages and religions from its neighbours: Bhutan, Tibet, Nepal and West Bengal. Working consciously toward the environment, Sikkim has hugged many ecotourism practices and has gone ‘all Organic’ since 2016.

We present to you a ten days guide to exploring Sikkim. Let’s traverse the state and mark our presence in Sikkim’s touristy and not-so-touristy places.

Elevation: 5181 m
Duration: 11 days
Distance: 90 km
Difficulty: Difficult
Key Feature: Trek to the base camp of the third highest peak in the world.

The prices will decrease if you opt for a bus over a shared jeep.

The temperature ranges from 5 to 25 degrees Celsius.
This is the best time to visit Sikkim.

The temperature ranges from 4 to 15 degrees Celsius.
The state glimmers in the rain, but is also prone to landslides.

The temperature falls as low as -5 degrees Celsius.
Snow lovers are welcome.

Places to Visit In Sikkim

The beauty of Gangtok cannot be described; it is like views manifest goodness from every angle. Resting at an elevation of 1650 m, Gangtok is a hill station carrying a mix of ethnicities and religions. The exuberance, cultural and historical significance can only be realised by coming here. Steep-narrow lanes form the city’s nerves and transfer one life form from one end to another.

From March to Mid-May, you’ll be received with the fragrance of Rhododendrons spread throughout the city.

Forming a base for adventure mongers for rock climbing, trekking, and mountain biking, Pelling is an equally revered place for peace lovers. It is a heavenly hill town in West Sikkim. Sophisticated for its virgin landscapes, therapeutical atmosphere, numerous waterfalls and historical structures, it is favourably included by travellers in their itineraries.

Local communities contribute majorly to the sustainable development of the town. Other local youths are involved in Darap Eco-Tourism Committee, a leading organisation that manages emerging Village Tourism.

350+ years old, Rabdentse ruins are a testimony of the former living kingdom of Sikkim. Surrounded by thick forests and lakes, this second capital city of the kingdom was destroyed and invaded by the Gurkha army. Now, only the ruins remain along with chortens. One can visit Pemayangtse Monastery, one of Sikkim’s oldest monasteries. The Archaeological Survey of India has declared this monument of national importance. 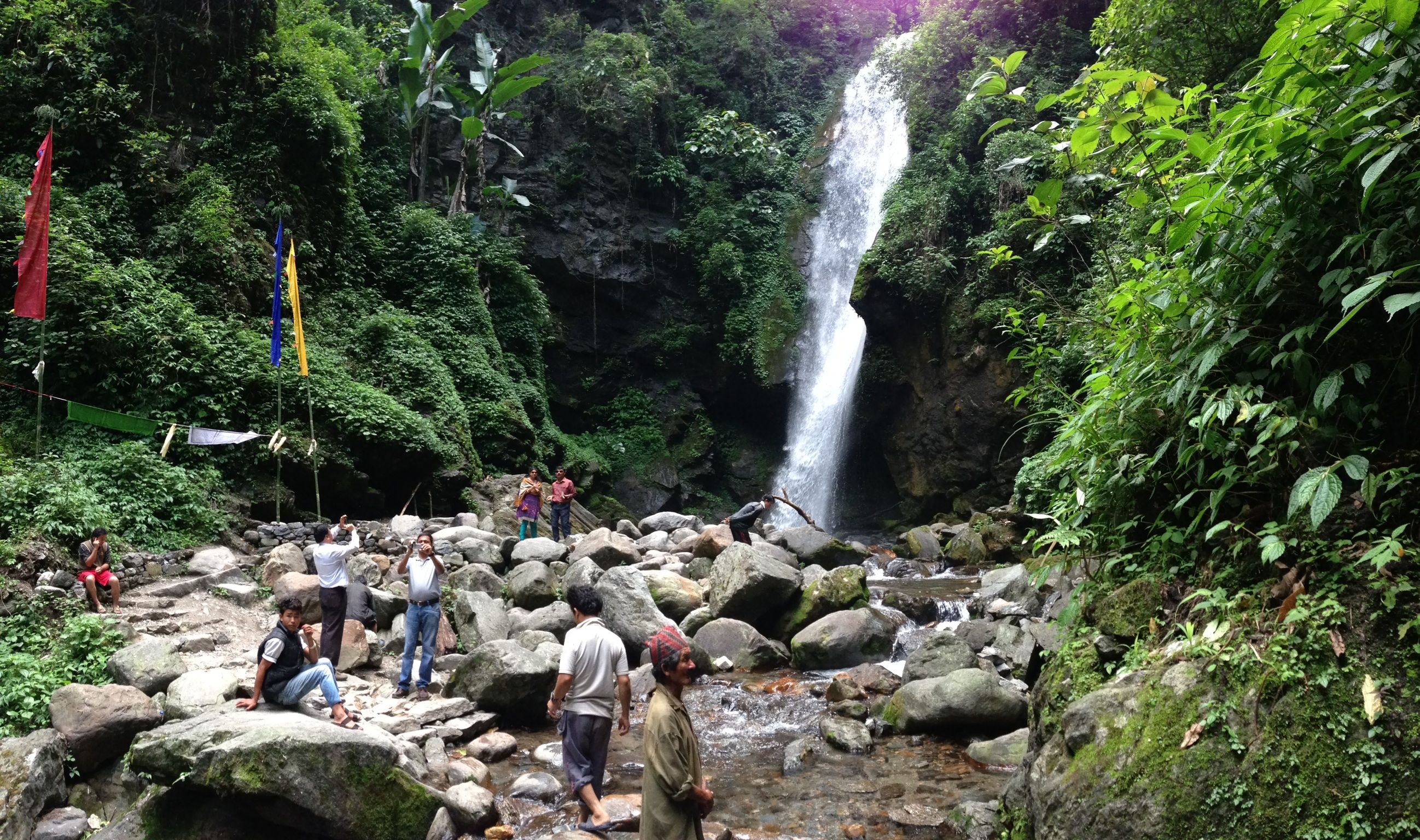 Kanchenjunga Falls is a perennial fall that takes birth in the glaciers of Mt. Kanchenjunga and drops from 100 feet before plunging into a pool.

Most notably, the fearless of all, the Shinshore bridge suspends at 100 m and extends for 240 m. It overlooks the majestic peaks and sweeping forest cover. Daunting as it may sound, this highest bridge in Sikkim and the second highest in Asia, provides memories of a lifetime.

If you have acrophobia, imagine this: A place so beautiful, so divine is set at 137 feet, and you don’t want to go?

Set amidst alluring green vistas, Pelling Sky Walk leads one to Chenrezig Statue. It sounds terrifying, but the experience is worth it

Bolt yourself in the healthy high greenwood and al fresco ambience of Kaluk before planning your journey ahead. Free from the hustle and bustle of bustling tourist places, dreamlike Kaluk awaits as you sieve down the rest of pretty West Sikkim.

It is one of the mesmerising offbeat villages offering 180 degrees panoramic view of Mt. Kanchenjunga. People from the Lepcha tribe inhabit it, and Kaluk once formed a unique place in the trade history of the world for its connection with the silk route.

Kanchenjunga National Park and Biosphere Reserve, a UNESCO World Heritage Site categorised as the first “Mixed Heritage” site, is located at the heart of the Himalayan range. It contains the most extensive zone of krummholz (stunted forest) in the Himalayan region. The unique natural landscapes, including plains, lakes, glaciers, mountains, rivers, and bustling biodiversity, make it synonymous with love. Mythological stories are associated with this mountain. Locals worship several natural formations like rivers and lakes. Cutting Sikkim from Chumbi Valley, Nathu La is a pass at 4310 m. It forms a vital trading route between India and China. It is known as “the whistling pass” because stronger winds produce a whistling sound when hit by the mountains. Visitors casually shake hands with the Chinese army that strolls past the border.

Splashed over by dramatic panoramas, Lachen will colour your gaze at 2693 m.  Especially during summer and monsoon, the whole place fills up with flowers of all kinds. Fluttering flags and prayer wheels enchants travellers to this sacred place.

You can talk to locals about the local self-governance practised in the region: Dzumsa. Everybody is a member of this traditional administrative system in some way or another.

Lachen has varieties of handicrafts and handlooms. Blankets made from yak and sheep wool, carpet, shawl, and handbags are some handlooms produced at Lachen. Women’s handicraft centre is a prime centre to learn about weaving. Other than this, set at a picturesque location, the Lachen monastery or Launching Gompa overlooks the villages and houses the statue of Guru Padmasambhava. One of the most pristine lakes in Sikkim is Gurudongmar lake at 5425 m. This is also one of the significant reasons people desire to visit Sikkim. The sacred lake is encircled by snowy massifs, forming a majestic translucent image on its surface. Otherwise, it is mainly frozen, with a part of it remaining unfrozen. It is believed that Guru Padmasambhava used his powers to keep a part of the lake unfrozen; since then, it has remained the same in winters. Locals use the same water for their daily chores.

It is interesting to note that the freezing alpine lake is one of the significant sources of the river Teesta.

Munch on popcorn and chocolates to avoid any kind of high-altitude sickness.

The actual feeling of the treacherous, prettiest and peaceful Himalayas comes at Kala Patthar, meaning black rock, mainly located in Nepal. It is a “No Man’s Land”. The place is recognised as always covered in snow. The snow is so white, as a result of which the rocks (originally green due to moss) appear black. It is especially well-known among trekkers for it provides close-up views of Mount Everest. On a clear day, a traveller is bathed in the sights of Nuptse and Changtse.

Lachung is a tiny hill station at the confluence of Lachen and Lachung Rivers, sitting comfortably at the height of 2624 m. The region oversees seasons of Rhododendron-filled sanctuaries, mighty Himalayan landscape, and motley biodiversity.

Most of the houses are either homestays, small eateries, or hotels. The best episode to register during your visit to Lachung is to know the local inhabitants—Lepcha and Tibetan descent.

North Sikkim shares a sensitive border with the People’s Republic of China; hence, civilians are not allowed beyond Zero Point. The place is named as such for the same reason.

The road to Zero Point is often compared to the most adventurous ride to heaven, the elevation being 4663 m. The route is decorated with views of snow-capped mountains, carpets of red moss on the roadside and peaks adorned with colourful Chimal trees. Both sides of the Zero Point are adorned with soaring Dongkila Peak and Khargula Peak.

Rising to an elevation of 3564 m, Yumthang Valley, also known as the Valley of Flowers, is a big deal in Sikkim. Rivers irrigate it; 250+ species of flowers embellish it; 20+ varieties of Rhododendrons make it home; hot springs emerge magically in its land, and the Himalayas provide love to all.

The place scintillates with glory from late February to mid-June when countless flowers carpet the valley in hues of all colours one can imagine.

Cradled in the Changthang plateau of Ladakh is the scenic Tso Moriri lake, a brackish or freshwater lake that lies at an altitude of 4522 m. It is one of the most beautiful and peaceful high-altitude lakes in India. 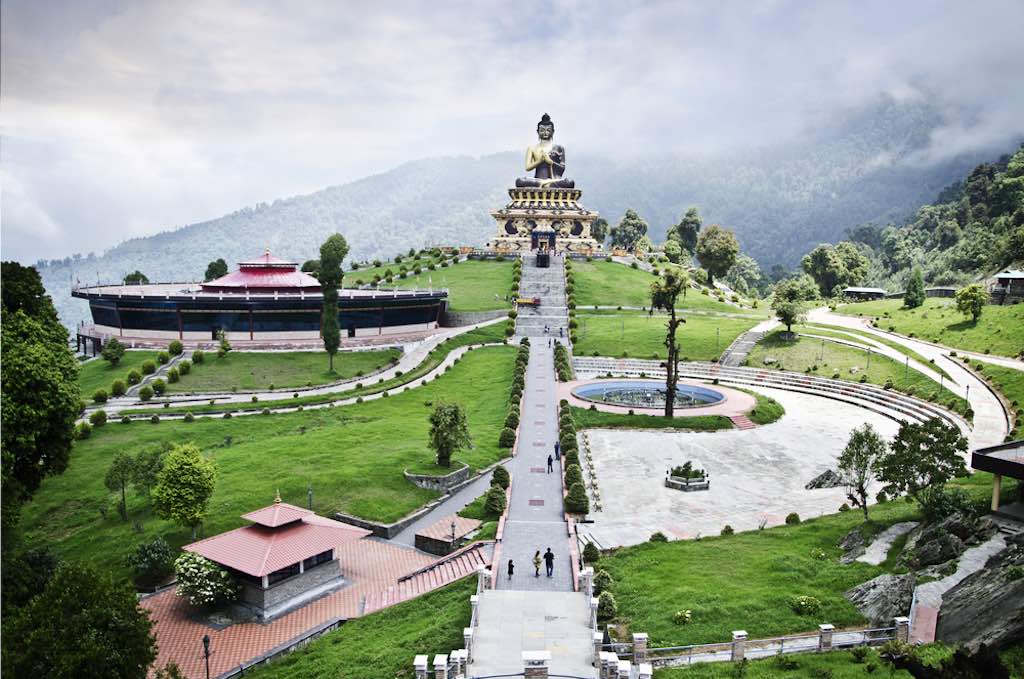 Poised at an altitude of 2438 m, Ravangla is blessed with unbeatable views of the Great Himalayan Range. Coming here is a visual treat. For hours, one can glance at Mt. Kanchenjunga, Mt. Pandim, and Mt. Kabru; the place comes alive with flowers, including Orchids and others.

Tsomgo lake or Changgu Lake is a glacial lake of religious importance in East Sikkim. It mostly remains frozen during winters. During summers, it receives water from surrounding streams, springs and melting snow. 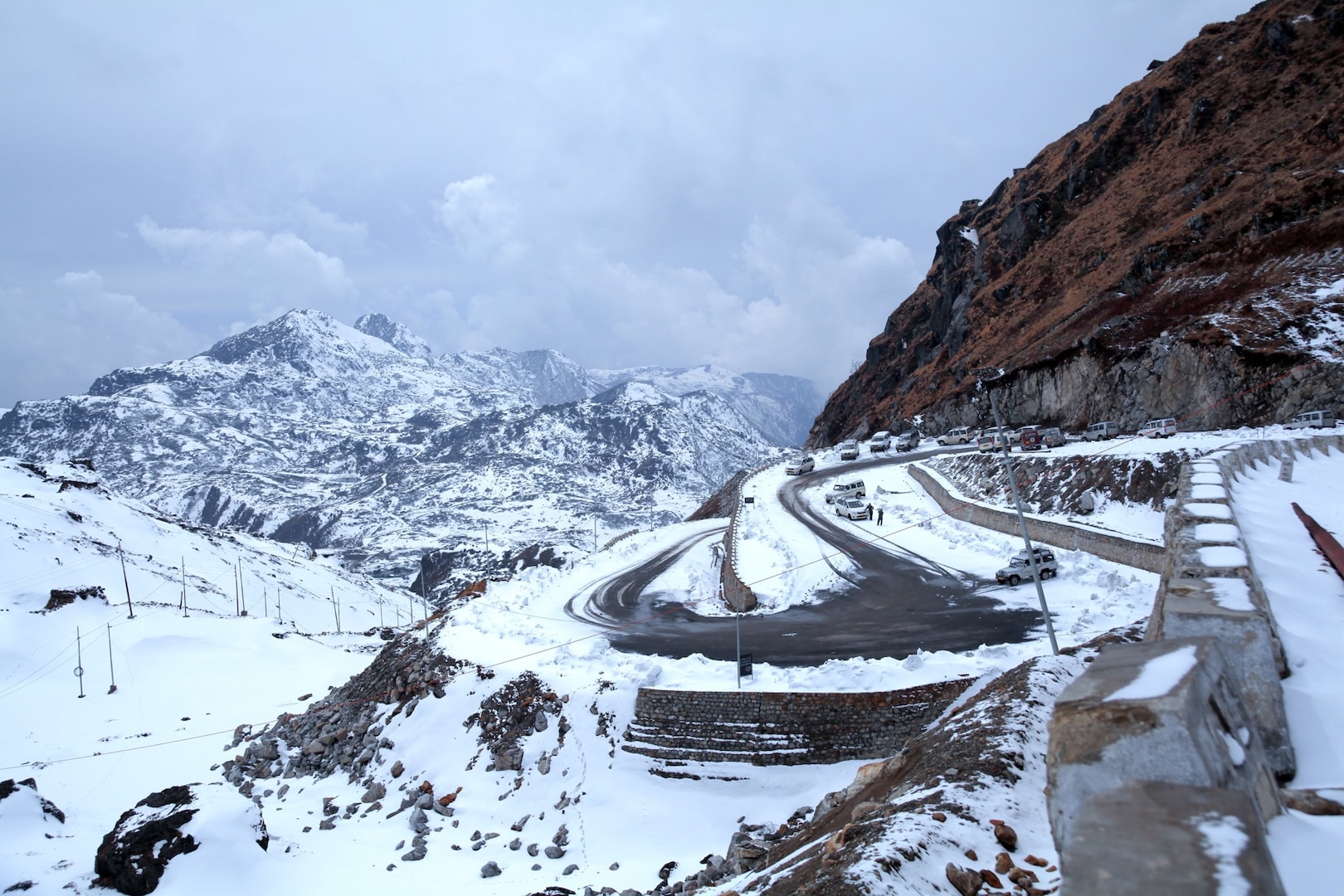 Cutting Sikkim from Chumbi Valley, Nathu La is a pass at 4310 m. It forms a vital trading route between India and China. It is known as “the whistling pass” because stronger winds produce a whistling sound when hit by the mountains. Visitors casually shake hands with the Chinese army that strolls past the border.

What To Eat in Sikkim

Travel (depends on the places and mode of travelling):

How Long Should A Trip Be for Sikkim

How to reach Sikkim Guide

You can hire cars and jeeps from the market area in Gangtok. And buses run regularly between Namchi to Gangtok, Pelling, Jorethang, Kalimpong and Siliguri.

Sikkim Guide: The Dos and Donts

This Sikkim Guide is your saviour. If you have any other doubts or have any information that can be useful to readers, write in the comments.