Pune, the Queen of the Deccan, is a city in Maharashtra, founded in 1436. It is the second major IT Hub of India and one of the top automobile and manufacturing hubs in the country.

Because of its rich legacy in education, and a wide range of educational institutions, it is also known as the Oxford of the East. It lies at the junction of the Mutha and Mula rivers.

Also called Poona, it was once the centre of power for the Maratha empire. The city first gained importance as the capital of the Bhonsle Marathas from 1714 until 1817, when the Britishers took over. The land of the Marathas was temporarily captured by the Mughals.

Pune is known for its cool weather, museums, theatre, classical music, parks, religious and historical monuments, literature and so much more.

If you want a getaway destination to spend a pleasant and different holiday, Pune is the perfect place for you! The best time to visit Pune is between October to February in the winter. The climate is both cool and pleasant and is perfect for sightseeing.

PLACES TO VISIT IN PUNE:

Shaniwar Wada is a historical palace that symbolizes the bravery that the Marathas always showcased, and was built in honor of the brave Peshwa Shaniwar Wada. It has a history of over 290 years and was the seat of the Peshwas (Prime ministers to the Maratha rulers).

It is named Shaniwar Wada for two reasons: The foundation stone was laid on a Saturday, and it was built in Shaniwar Peth in honour of Peshawar.

The Prime Minister to the great ruler Chhatrapati Sahu, Peshwa Bajirao I, laid the foundation for Shaniwar Wada in the year 1730 AD. It cost them 16,110 to make the Wada which was a very big amount back then. The wada is an instance of a blend of both Mughal and Maratha architecture. It was built entirely out of wood inside and the boundary wall was made of stone.

Now, it is in ruins as it was destroyed due to many military attacks and fires in the 18th and 19th centuries. 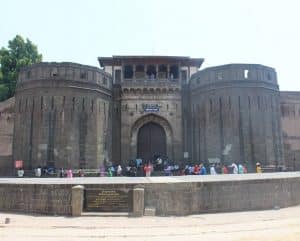 The Aga Khan Palace is a monument of rich historical importance in Pune. It was built as a charity by Sultan Mohammed Shah, Aga Khan III, in 1892 for those who were severely affected by the famine that had hit the city back then. This palace stands in the pleasant Yerwada area, away from the hustle and bustle of the city. It is largely Islamic, but the palace also has hints of Italian architecture (with its arches). The palace comprises five halls and large verandas. It was donated to the government of India in 1969. This palace was also once used as a prison by the British for Mahatma Gandhi, Kasturba Gandhi, and Mahadeo Desai, as well as Mira ben, Pyarelal Nair, Sarojini Naidu, and Dr. Sushila Nayar. Sinhagad fort is located on a cliff in the Bhuleswar range of the Sahyadri mountains. It has a memorial to the brave Tanaji and the tomb of Rajaram l (second son of Maratha emperor Shivaji). It was initially called the Kondana fort. When Tanaji was killed by Udai Bhan in the battle, Chhatrapati Shivaji expressed his remorse with the words, “Gad aala, pan Sinha gela” – “The Fort is captured, but the Lion is lost” And so it was named Sinhagad. The fort consists of military stables, a temple of the goddess Kali, a brewery, historic gates, and a Hanuman Statue. 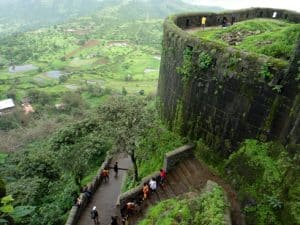 The Raja Dinkar Kelkar is a unique museum. It is the one-man collection of Late Dr. D.G. Kelkar. ‘Kaka’, as Dr. Kelkar was affectionately known dedicated his collection to the memory of his only son `Raja’ who died an untimely death. It consists of the Mastani Mahal, the palace of Mastani Bai, wife of Bajirao Peshwa l. The palace was constructed about 300 years ago and was found in ruins. The palace was then transformed into a museum. The Mastani Mahal rebuilt now in the premises of this museum depicts the story of love between Bajirao Peshwa I and his beloved Mastani.

There are over 20,000 objects in the museum now. Kaka was a person obsessed with art. He used to collect as much as he could. For around 60 years, he traveled across the country collecting artifacts. The Museum contains a variety of everyday artifacts, which includes artifacts like Lamps, Palanquins, Carved Woodwork, Tinware, Combs, Bowls, Stones, Hookahs, Locks, Spittoons, Musical Instruments, Miniature Paintings, Glass Paintings, lime containers, Intricately Carved Wooden Doors and Windows, Ancient Dwellings, Nut-cutters, Figurines, Bronzes, arms and armors, ivory, kitchen utensils, textile, etc. The museum has 42 different sections and is a must-visit for any art lover. 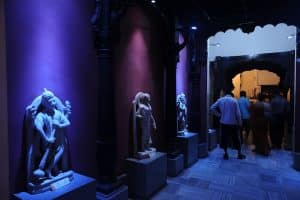 The Pataleshwar Cave temple, located on the Jangli Maharaj Road, is devoted to the God of the Underworld, Pataleshwar. It is an architectural beauty built in the 8th century. The temple is said to have been carved out of a single rock. Along with Lord Pataleshwar, the temple also has statues of Ganesh, Sita, Ram, Lakshman, and Lakshmi.

It also has a shiva lingam at the main shrine. The construction of this temple was inspired by the Elephanta caves but it was left incomplete because of which, there is no particular entrance to the temple. In Kolad, a few hours away from Pune, you can go for the white-water rafting. You can also go to the Burma bridge, rope courses, flying fox, and the trust track. You can go on a 1-day trek to Andharban. The trail passes by beautiful waterfalls and offers views of the Kundalika valley.

HOW TO REACH PUNE:

Major airlines have flights daily (almost 34 flights daily) from Bangalore to Pune. 11 of them are direct and 23 are connecting flights.

There are many options if you want to travel by train to Pune. Some trains that operate between Bangalore and Pune include Jp Suvidha express, Chalukya Express, etc.

Traveling to Pune by road is fun. You have two routes that you can travel from. It takes approximately 13 hours to reach. You can take detours and visit other places on the way as well.

WHAT TO EAT IN PUNE?

Pune is well known for its food. Some of the dishes that you must try are Vada Pav, Misal Pav, Bun Maska, Kheema pav, Chutney sandwich, sabudana vada, Patti samosa. 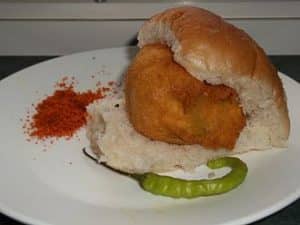 Pune is one of the best places for shopping in the country. If you are a shopaholic, make sure you visit Pune once. It has Maharashtrian Naths, Paithani sarees, Kolhapuri chappals, Brassware, silver, accessories, and so much more.

WHERE TO BUY IT?

Some of the best places for street shopping in Pune are Fashion Street, Hong Kong lane, Juna Bazar, and Tulsi Baug.

PLACES TO STAY IN PUNE:

HOW LONG SHOULD A TRIP BE FOR PUNE:

Two days are enough to visit all the major attractions in Pune. If you want to visit the places around Pune or go on treks, you can stay back for a day or two.

One of the biggest and most important festivals in Pune is the Ganesh Mahotsav or Ganesh Chaturthi. It is a Hindu festival celebrating the arrival of Lord Ganesh to earth from Kailash Parvat, with his mother Goddess Parvati. The festival is marked with the installation of Lord Ganesh’s clay murtis privately in homes and publicly by Shri Bal Gangadhar Tilak in Pune in the year 1893 on elaborate pandals. The festival is held between August and September. In Pune, it goes on for 10 days on a very grand scale. Huge Ganesh idols are worshipped at nicely decorated pandals, also known as Dekhavas for 8 to 10 days. These Dekhavas are organized by the Mandals, who work collectively for the entire locality. Various Mandals shouting the slogans of Ganpati Bapa Morya take out huge processions during the first day and the day of immersion of the idols throughout the city. People from the city and nearby towns and districts, come in numbers to witness the Ganesh festival celebrations. WEATHER AND TEMPERATURE IN PUNE:

The average annual temperature in Pune is 24.3°C. It has a hot semi-arid climate. Pune experiences three seasons: summer, monsoon, and winter. How to do trekking with flat feet?
November 28, 2021Supriya Sahu How to Handle Leeches on Monsoon Trek?
August 6, 2021Supriya Sahu