If you, like most Bangaloreans have exhausted the more mainstream options to travel around Karnataka and are looking to go off the beaten path, away from the tourist crowds but closer to nature, you’ve come to the right place. The below listed offbeat treks from Bangalore offer breathtaking sights along with tranquil settings that most popular tourist destinations today lack and make for a perfect weekend escapade far away from the chaos of city life.

Located 30 kms from Munnar in the Theni district of Tamilnadu, Kolukkumalai is home to the highest tea plantations in the world at a height of around 7,000 feet above sea level. Surrounded by rugged mountains, panoramic views, and excellent tea, Kolukkumalai offers breathtaking views of Kerala’s towering hills on one side and Tamilnadu’s vast plains on the other. Kolukkumalai is accessible only by jeeps owing to the lack of a paved road to the place. The same can be hired from the town of Suryanelli from where a 10 km bumpy off-road journey begins towards the Kolukkumalai tea estates. However, once at the top, you are rewarded with mesmerizing views of majestic mountains peaking out amidst an ocean of clouds.

The tea factory at Kolukkumalai dates back to the colonial era and follows traditional techniques of tea-making even today and offers visitors various options for experiencing the process along with tasting its rich and flavorsome tea. Kolukkumalai also offers travelers several options for camping and trekking across its hilly terrain that make for an adrenaline-pumping experience. No more than a mere 3 to 4 square kilometers in size, Agumbe located in the Shimoga District in the Malnad region of Karnataka holds within itself a treasure trove of lush green rainforests, breathtaking monsoon vistas, gushing waterfalls, and a plethora of wildlife. And the key contributing factor to these natural marvels is the incessant rains, the highest in all of South India, that Agumbe receives during the monsoons giving it the tag of “Cherrapunji of the South”.

Adding more flavor to this rich biodiversity is a simple village life untouched by the modern world that forms the backbone of this rustic setting and offers a truly immersive experience for those visiting the place. Best explored on foot, Agumbe with its maze of nature trails and rainforest treks has pioneered in rainforest conservation programs, trekking, and tourism and is a haven for nature lovers and wildlife photographers alike.

The Sunset Point on the Udupi-Agumbe road, Kundadri Hill, Gopala Krishna Temple, and a plethora of waterfalls including the Jogigundi, Onake Abbi, and Koodlu Theertha form some of the popular places to visit in Agumbe. Join Plan The Unplanned for a truly authentic rainforest camping experience in Agumbe

Located in the Malnad region in the foothills of the Western Ghats, Sakleshpur is a biodiversity hotspot known for its pristine landscapes and unparalleled natural beauty. Surrounded by towering hills and vast coffee, cardamom, and pepper plantations, Sakleshpur is a haven for trekking enthusiasts with several trails amidst canopied rainforests, lofty peaks, mesmerizing waterfalls, and even abandoned railway tracks. Some of the popular treks around Sakleshpur include trails around Agni Gudda, Ombattu Gudda, and the Jenukal Gudda Hill (second highest peak in Karnataka). The Manjehalli Waterfalls, Abbi, and Hadlu Waterfalls are also some of the must-visit attractions in the region.

Apart from the numerous nature trails and waterfalls, Sakleshpur is also home to majestic temples and ancient forts including the Sri Sakleshwara Swamy Temple and the star-shaped Manjarabad fort, offering a cultural high for the history and cultural buff in you. Explore and trek along the quaint hills of Sakleshpur with Plan The Unplanned here.

A perfect weekend escapade for history buffs, the Channarayana Durga fort dates back to the 17th century and has laid witness to the rise and fall of several kingdoms and rulers over the centuries. A relatively lesser-known weekend destination from Bangalore, the Channarayana Durga trek is devoid of the usual weekend crowds and makes for a laid back hiking experience as you explore the fort ruins at your own pace. However, the trek itself is quite challenging as it involves maneuvering over steep and slippery rock faces at few places and hence requires a decent level of stamina to complete the same.

On the border between Goa & Karnataka at Kulem the Mandovi river falls from a height of 310 meters to create India’s sixth-highest waterfalls aptly named Dudhsagar owing to its appearance of that of an ocean of milk pouring down the hillside. Located in the Bhagwan Mahavir Wildlife Sanctuary, the sight of the mighty Dudhsagar falls and the railway track that passes right underneath it has become an iconic sight and more so after its feature in the movie ‘Chennai Express’.

Although one can reach the Dudhsagar falls via jeep, a more adventurous option is to trek across railway tracks and forest trails that lead you to the base of the falls. This 10-15 km trek (one way) depending on where you start, takes you through lush evergreen forests,  impressive railway tracks and culminates with breathtaking views of the Dudhsagar falls making for a scenic and thrilling affair. Join Plan The Unplanned for an adventurous trek to Dudhsagar Falls. 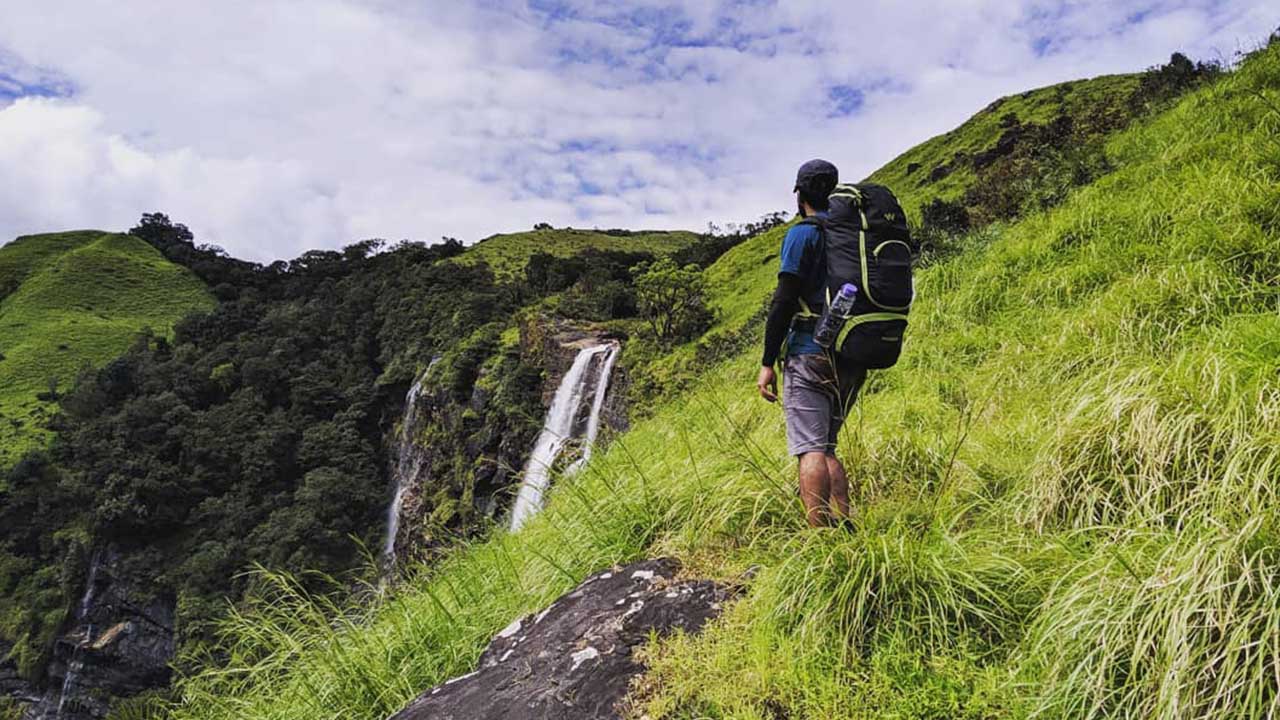 The Ballalarayana Durga Bandaje Falls Trek takes you through thick shola forests and wide-open meadows that could easily compete with some of the best treks in Karnataka. That combined with the view of the Bandage Falls as it plunges down 200 feet into the valley down below makes for a surreal sight. The waterfall continues its journey downhill as a single stream and eventually joins the Netravathi river as a tributary. For an offbeat and exhilarating trek to Ballalarayana Durga and Bandage Falls, join Plan The Unplanned here.

An untouched hamlet nestled between the Kudremukh ranges and the Charmadi peaks, Didupe is a small village located in the Beltangadi Taluk in Dakshin Karnataka. It is home to the exquisite Didupe falls, which plunges 70 feet below from a rocky cliff that makes for a breathtaking sight. Also known as “Kadamagundi” or “Anadka falls” locally, one has to trek around 3 km through thick and serene forest trails to reach the falls from Didupe village.

The Dedupe falls creates a shallow pool at its base that makes for a great place to safely take a dip and even get directly underneath the gushing waters for a relatively painful yet exhilarating experience. One can also catch a glimpse of a rainbow at the base of the falls as the sun glistens through the falling water. Prior permission from the forest department is required to undertake the trek apart from local advice on the current safest trek routes as the area is prone to landslides during the monsoons.

Located at the foothills of the Ballalarayana Durga range, Ermai falls is a seasonal multilayered waterfall that comes into full glory during peak monsoons. Surrounded by dense forests, the Ermai Waterfalls is approachable only on foot and requires an almost 2 km trek to reach the waterfalls from Kajur on the Mundaje-Didupe Road. Flowing down over several tiers from a height of 75 feet, the more adventurous can climb up its multiple levels and view the waterfalls from behind. However, exercise extreme caution as the rocks are extremely slippery and many have lost their lives attempting this feat. Trek to the scenic Didupe and Ermai Waterfalls trek with Plan The Unplanned here.

Unwind at Kumta’s secluded beaches, experience its rich local culture, go back in time at its several temples and forts or simply witness the majestic Aghanashani river winding her way into the Arabian Sea. This quaint coastal town located in the Uttara Kannada district of Karnataka is filled with authentic experiences for those wishing to escape the tourist crowds and go back to simpler times.

The best way to explore Kumta is to trek along the coastline through forest trails that connect the various beaches including Heaven Beach, Small Heaven beach, and Mangodlu to name a few. The Kagal Fort at Kumta perched atop Kagal Hill offers panoramic views of the Aghanashini Delta meeting with the Arabian Sea and is a great spot to spend your evenings. Spend your weekend trekking along the untouched beaches of Kumta here.

Located at the meeting point of the Kali river and the Arabian Sea lies the quaint beach town of Karwar. Being the administrative capital of Uttara Kannada District, Karwar is a well-kept secret and offers almost everything that its more feisty neighbor, Goa offers minus the obvious crowds and party scenes.

A hub for water sports including snorkeling, kayaking, and dolphin spotting, one needs to take a 45-minute boat ride from the mainland to the island of Kurumgad to avail of these services. With a slew of untouched and pristine beaches for you to explore ranging from the more popular Rabindranath Tagore and Devbagh Beach to the more isolated Binanga, Tilmati, and Majali beaches, Karwar is a beach lover’s paradise. The several mangrove-covered islands that lie off the Kali River Estuary also offers tranquil settings few other places offer. Explore the serene beaches of Karwar with Plan The Unplanned here.

As is with every destination, visiting these offbeat locations requires one to exercise special care in order to leave them exactly as one had found them. We at Plan the Unplanned pride ourselves on promoting and practicing the concept of responsible travel across all our treks along with educating and inspiring our trekkers to be more responsible travelers along the way.

Join Plan The Unplanned for these offbeat treks from Bangalore and explore these hidden gems as a true traveler and take back experiences, sights, and moments that will be treasured for a lifetime.

A passionate traveller, creative thinker and a firm believer in the concept of travelling responsibly, he is constantly on the lookout for the next big adventure while sharing the thrills and spills from his journeys in an attempt to inspire others to do the same. You can follow his adventures on www.thecluelessmuni.com
PrevNext

Guide To Acclimatization In The Himalayas
January 5, 2019Gowtham Injamuri