If you dream of going to a place with lush greenery, then Meghalaya is the right choice for you. With more than ten living root bridges, dozens of waterfalls, hills, rivers, and more than a thousand caves, Meghalaya, which translates to ‘abode of clouds,’ is heaven on earth for nature lovers.

The name ‘Meghalaya’ was coined in 1936 by the geographer S.P. Chatterjee. The capital of this beautiful state is the spectacular hill station Shillong, known as the Scotland of the East.

Some of the adventure sports that you should try in Meghalaya include – rappelling, scuba diving, camping, caving, ziplining, waterfall rappelling, paddling and canyoning. Doesn’t this make you want to pack your bags and rush to this marvellous state?

Here is a list of the seven places that you must visit in Meghalaya:

You can visit two places to enjoy the beauty of these unique yet astounding living root bridges in Meghalaya- near Cherrapunji and Mawlynnong.

The living root bridges are simple suspension bridges formed by solid aerial roots of the Ficus elastica tree (rubber fig trees). These root bridges are handmade by the people of the Khasi and the Jaintia communities.

The secondary roots of the Ficus elastica lock themselves to the base to protect these trees.

Since the region is always wet, the woods rot quickly. So, the Khasi people came up with the idea of making these bridges out of living organisms. Unlike the wooden bridges, which decay during the monsoon seasons, the living root bridges remain alive and grow stronger over time. These strong roots protect the trees by locking themselves to the base.

The longest living root bridge is the Rangthylliang bridge (2400 feet in length), located near the Khasi town of Pynursla.

If you are tired of the pollution and garbage, and searching for a breath of fresh, clean air, then Mawlynnong is the place for you. This beautiful village, also called “God’s own garden”, with its friendly people, holds the title of “Asia’s cleanest village”! It is located in the East Khasi Hills district. The word Mawlynnong in Khasi means ‘Maw’ – stone, ‘Lynnong’ – scattered.

There are around 82 households in this village, and every single person makes sure that the village remains clean. This village has placed garbage bins made out of bamboo in every corner so that the environment remains clean. Along with this, the residents also maintain clean and hygienic washrooms inside every home.

All the food that you get in the village is organically grown. They have banned the use of plastics, and smoking is also prohibited here. The villagers also make sure that they recycle water. It is an age-old tradition, and every single villager is taught about hygiene and the importance of cleanliness.

This village is not just clean; it also has a 100% literacy rate. Every single person can converse fluently in the English language. This village follows a matriarchal system and is known for empowering its women! This fantastic village with colourful flowers, also has a skywalk (85 feet high), the Marsai cave, a living root bridge, Nohsngithiang falls and the famous river Dowki that separates India and Bangladesh!

There are 125 sacred groves in Meghalaya, and one among them that you can visit is the Mawphlang Sacred groves, an ancient forest preserved by the Khasi folks. The tribals believe that the Goddess Labasa lives in these forests.

They think that if they sacrifice animals and dance to please the goddess, she will protect them and keep any evil spirits away. Mawphlang is one of the most underrated places in Meghalaya. This serene forest is located in the East Khasi Hills district. This forest has lush greenery and an interconnected network of plants/trees (some of which are 1,000 years old!).

The highlights of this forest are the David Scott trail, the Khasi heritage village, the forest trail, the rare varieties of trees and plants, the traditions and the monoliths!

Visitors cannot intentionally take anything from this forest, not even a dead leaf or a twig. It is considered a bad omen. It is said that the Indian Army in 1970 tried collecting wood and transporting it in a truck, despite the locals asking them not to. The truck did not start even after they kept trying.

In this forest, you will find various rare plants, trees and mushrooms. In ancient times, Ki Lyngdoh (ceremonial leaders) and kings had their meetings here. (These sites are marked with monoliths). There are various stories about these forests, and if you get a local guide to walk you down the woods, you will get to know that there are lots of cultural and religious beliefs associated with the groves.

There are ten named mountains in the state of Meghalaya. The highest peak is the Shillong peak located in the Air Force Station, Laitkor Peak, Upper Shillong. You can either walk or ride to the top. This peak is at 6,433 feet and offers a panoramic and picturesque view of the entire city, the Himalayas, waterfalls, and the plains of Bangladesh. If you love looking at a lot of greenery, then this viewpoint is the best for you.

This peak also resembles a crown placed on top of the hill. Legend has it that the deity Lei Shyllong (It is said that Shillong got its name from the peak), who came to live with Mankind, lives in the hills and protects the entire city. It is highly recommended to carry a valid ID proof when visiting the Shillong peak as it is located inside the Defence area.

Fed by the incessant rains, The Nohkalikai falls possibly India’s answer to the Iconic Angel falls. It is not just one of the many beautiful waterfalls you can find in Meghalaya, but it is also the tallest plunge waterfall in India, with 340 metres.

The story behind the Falls:

It is located near Cherrapunji, in the East Khasi hills. The word Nohkalikai means- ‘Jump of Ka likai’. The name of the falls has a story behind it. Ka likai had a loving family – a girl child, and her husband was a porter. Her husband died in an accident while trying to carry iron on his head. She had no source of income and started working as a porter. She was forced to remarry and she could not pay much attention to her second husband as she was busy with work and looking after her daughter.

Her husband was jealous of how much she loved her daughter. He envied her daughter so much that one day when Ka Likai went out to work, he killed her daughter and prepared a meal out of her flesh. When she came back home, Ka likai was tired, and so she ate the food on the table without having any second thoughts. When she went to take the betel leaves after her meal, she saw that her daughter’s fingers were there in the betel leaf case. She felt horrible when she realized what had happened and went mad. She started running and jumped off over the edge of the cliff into the falls and died.

The bizarre story aside, Nohkalikai falls a treat for adventure seekers. You can trek, camp, bird watch, swim, and so much more here!

There are about 1650 caves in Meghalaya’s Jaintia, Khasi, and Garo hills, out of which 1000 caves have been partially or fully explored. The Krem Liat Prah cave is among the 150 already discovered caves made of natural limestones and sandstones in the Shnongrim Ridge of the East Jaintia hills.

With a length of 30,975m, it is the longest cave in both Meghalaya and India. It is also the longest natural cave in South Asia. It has even attracted palaeontologists for being home to fossils of dinosaurs, especially the Mosasaurus, which used to be a giant reptile about 66 to 76 million years ago. The word ‘Krem’ means ‘cave’ in Khasi. This cave was only discovered in 2016.

If you want to explore the unexplored, a visit to these caves is a must! Fishes, stalactites, and stalagmites are only a few of the things that will add to your thrill! This dark and silent cave features an enormous trunk passage called the Aircraft Hangar.

Umiam Lake, or the Barapani Lake, is an enchanting artificial reservoir located 15 km from Shillong. It covers an area of about 220sq km, making it the biggest artificial lake in Meghalaya. The word ‘Umiam’ means ‘Water of Tears’ in Khasi.

Legend has it that two sisters began their journey from heaven to descend to Meghalaya. The younger sister got lost on the way. The elder sister couldn’t find her and was very saddened by this. She started sobbing profusely, and her tears formed the Umiam Lake.

Apart from the serenity that this lake offers, it is also famous for its pretty boathouse by the Lumpongdeng Island, an isolated piece of land in the reservoir. You can also visit this spot for Water sports, Boating, Trekking, fishing, and camping! You can trek through the dense forests and camp at The Lake Island.

In summers, the shores are ornamented by beautiful Gul Mohar trees, and in winters, the water level subsides and turns bright blue like a cloudless sky.

Already delighted and excited to go to this holy land? Here are some Meghalaya tour packages at affordable prices: 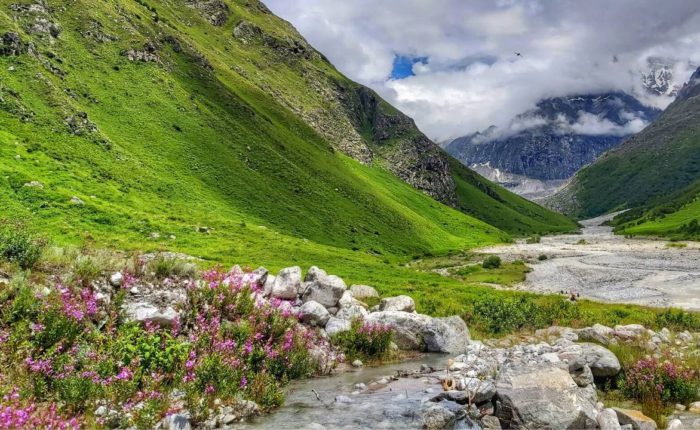 Valley of Flowers- The King of Colorful Vacations
May 22, 2021Supriya Sahu Trekking in Sri Lanka – The Ones You Must Add To Your Bucketlist
June 1, 2021Supriya Sahu