Rolling green hills, clouds kissing the mountains, forest trails, bamboo shrubs, and a dozen waterfalls, the Kudremukha Peak trek has it all; No wonder it is called the Himalayas of the south. The scenery keeps changing on the trek and will surely amaze anyone. Coming under the Chikmagalur District of Karnataka, the trek to Kudremukha is one of the most exciting treks in this region. It is the third-highest peak after Mullayanagiri and Bababudangiri. Absorb the beauty of the Western Ghats as you walk up the trail. Very few people know the fact that the Western Ghats are considered a UNESCO World Heritage Site for their natural beauty and for being an icon of environmental balance. The lush greenery of the hills can never fail to mesmerize a soul.

You’ll cross several cascading waterfalls and narrow streams, thick forests with a variety of trees, and the whistling of birds will keep you entertained all throughout. And finally, when you’ll reach the peak, the picturesque view from the top and the chilled wind will absolutely blow you out of your mind and make you numb for a few minutes, before you regain your consciousness to feel the enchanting magic of the place. So if you are bored with the city lights in Bangalore, then forget everything and join us for this weekend trek to Kudremukha and find yourself amidst nature.

After an early grab and quick freshening up, everyone now gears up for a bumpy jeep ride to the Kudremukh Trek Base. The ride is adventurous as one crosses coffee plantations and muddy roads with waterfalls and streams as well on the way.

The trek to Kudremukh starts at the Forest Department Office after collecting the permits. The Trek needs to start as early as 6 AM with strict policies of return time and leave no litter.

Our trek leaders shall now brief you about the entire Kudremukh Trail and certain tips on ascending and descending. We then hit the trail with our Tempo being high and with Plan The Unplanned’s traditional cheer dance.

At the beginning itself, after a few minutes of walking there will be a stream crossing. In monsoons, the flow and depth of the streams would be quite heavy.

After the stream crossing, there is a slight ascent on a muddy path surrounded by ferns, several shrubs, and lush green grass. This continues for around 1 to 1.5 km and then there comes an elevated plain and a stand-alone tree which is called Ontimara. (Lonely Tree)

On the leftofn Ontimara, the trail becomes flat for some time, on the right one can see the Kudremukh valley and Somavati river flowing below. The trail soon converts into a forest trail- dark shola forests with water streams. There are a lot of leeches at this point, be aware, but it’s difficult to avoid them. After another stream crossing, there are open meadows. It is an amazing feeling to trek through dense forests, with open meadows in between. The transition of scenery keeps the thrill to the end.

Kudremukh peak becomes visible after some point. The clouds will come closer and nearer as if to kiss and hug you. Amidst the open meadows, after further walking, there is a board by Forest Department Office stating the direction and distance (7 km) to Kudremukh peak.

After another dense patch of trees, is another stream of water, and the last water source before the peak. After the stream crossing, there is a steep ascent. On the right, the view is mesmerizing, clouds passing over rolling lush green hills. Try taking a few time lapse videos here. After furtherascendingd you reach the second Ontimara.

Before reaching the Ontimara, be amazed by the Kudremukh range all around. From the Ontimara, the view on the right is enthralling- rolling vibrant green hills, full of energy passing all their energy onto you. After the Ontimara, the trail is a mix of narrow paths between dense forests, bamboo shrubs, and steep ascents.

The zig-zag steep climb is difficult comparatively but the views encourage you to keep going. In monsoon, it usually rains, along with winds that one will feel as if the raindrops are slapping you. This part of the trail will surely give you the thrill of a monsoon trek.

After the end of the zig-zag point, pause for some time to look and appreciate how far you have come. The rolling hills, lush green and full of life, the open meadows, the grasslands everything on the trail is just perfect, why go to Scotland when you can experience this in India itself?

At the end of the zig-zag point, there is a rock cluster with a blue arrow mark showing the direction to the peak. On the left, some ruins used to be a British Rest house. The last part of the trek is not a steep climb because of the shape of the mountain. It is a level walk past green fields. At the peak, there is Forest Department Board as well showing the details of Kudremukh peak and other peaks of Kudremukh national park.

Wait sometime there to see the hills and clouds play peek-a-boo. After some time start the descent, capturing and soaking in as much as possible. Leech bites, heavy rains, gusty winds nothing can stop you conquer the peak if you want to. Come back rejuvenated with a thousand memories, a lot of epic captures, and a bunch of new friends. 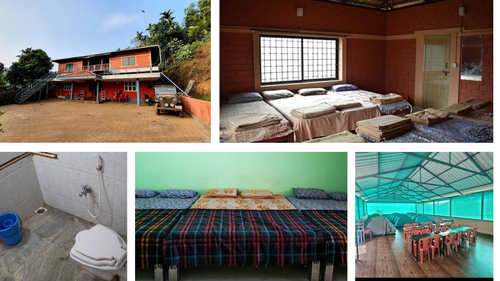 Elniru means Sweet coconut, it is said that water is as sweet or tastes similar to coconut water. The ride to Elniru is through muddy roads and one can drive till the motorable area. Then one has to descend down a little to reach the waterfall. On the way, there comes another beautiful waterfall, which looks like wallpaper. Don’t be overwhelmed by that waterfall itself as that isn’t our destination.

After further descend and a then little hike, one can hear the sound of falls in full flow and birds chirping. In some time, the Elniru falls become visible. It is a huge waterfall full of energy, feeling the water on your face is bliss. Taste the water, it actually tastes sweet

We plan on returning to Bangalore from elniru Falls. After this trip, you will have seen the lovely Karnataka - One State Many Worlds, made wonderful friends for your next trek, and taken amazing images to look back on and remember the good times. The following is our cancellation policy in the unlikely event that we have to postpone your trek:

During and After the Trek: In the event of severe weather, taking the trekkers' safety into consideration, a day may be shortened or the trek may be abandoned entirely. There will never be a refund of any kind.

Prior to the trek: Make a plan in the event that a trek is canceled due to a natural disaster (such as a rainstorm, flood, landslide, earthquake, or unanticipated political disturbance, curfews, local riots, government orders, or directives from the forest department). A VOUCHER for the full value of your ticket will be issued by The Unplanned.
The payment gateway fees will be deducted from any refunds that are granted.

If we have to cancel your trek because there aren't enough reservations for that particular batch or we don't have enough participants, PLAN THE UNPLANNED will refund you 96% of the trek money ( Payment Gateway charges shall be deducted )

Well, most of our treks are usually confirmed by Thursday and you would receive a EVENT HEADSUP mail that would contain details regarding Pickup Points ( Location and Timings ), Outdoor Leader ( Point of Contact ) ’s, and Don’ts.
Yes, the Event Headsup email would contain a link for Whatsapp Group through which one can join and interact with fellow travelers and outdoor leaders.
Not at all. You could keep all the extra luggage back at the campsite/homestay and carry only the necessary stuff for the trek ( Raincoats, Torchlight, Waterbottle, lunchbox, and your valuable)
Yes, we do have options for picking a traveler on board with a few locations provided they are on the route to our destination. The following are the same: - Croma Store, Sony World Signal - Trinity Circle Metro Station - Yeshwanthpur Metro Station - Goraguntepalya Metro Station
Well, if you select this option, all the travel arrangements for your entire itinerary must be managed by yourself, and Plan the Unplanned crew will not be managing anything related to your travel. We recommend you come via car for a smooth travel experience to, from and within the destination.
Yes, it’s much safe and sound. We have been organizing these treks over the years now and we always have had an equal ratio or sometimes we have women in the majority. We also have female outdoor leaders who are on board and lead the other trekking enthusiast. We have made sure our homestay/tent accommodation is separate for men and women.
Yes, you can postpone your trek to a future date by paying a rescheduling fee of Rs 1500/person. You can write to us at [email protected] as regards and our team will get in touch with you on the same.
Details for availing discounts are mentioned in the following link, https://www.plantheunplanned.com/membership/
No. We would not advise you to do this trek on your first trek as the trek difficulty is between Moderate-Difficult and it demands one to be physically fit for this trek.
Yes, one must hire a guide to trek Kudremukh as the forest officials close the trek by 6:00 PM.
Throughout the journey, you will be outside of the network's service region. Only BSNL and JIO network receives a signal at this place.
Yes, it is possible to leave your luggage at the homestay and carry the necessary things on your trek.
The ideal time to go on the Kudremukh trek is undoubtedly during the monsoon season.
Yes, there are leeches on this trail and are mostly found near the rivers and streams.
On the Kudremukh trip, camping is not permitted. Many homestays, on the other hand, provide tent accommodation at the starting site.